Book Tip: The Dyehouse and Other Australian Text Classics 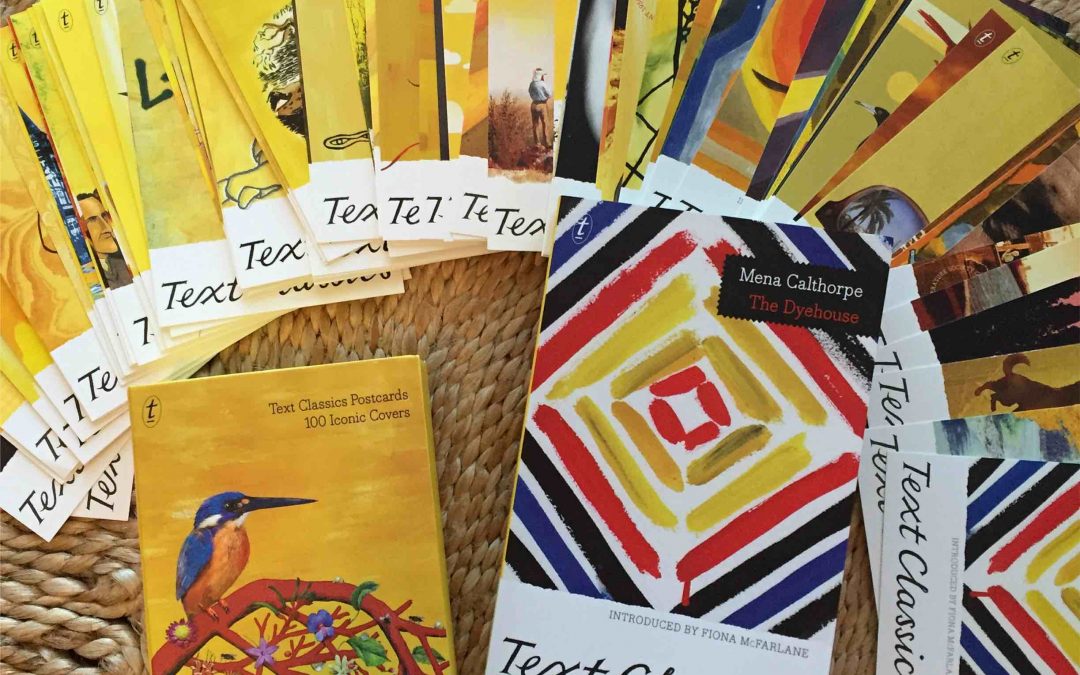 I recently attended the Celebration of the 100th Text Classic at Gleebooks in Sydney. I had read about this event in the Text Publishing newsletter and was thinking about attending it. At the same time, the newsletter from the NSW Writers’ Centre hit my inbox where Gleebooks offered a double pass for a member of the centre. As I had not read any of the Text Classics yet, I was curious to learn more and hear what the 100th book was about.

Additionally, it was a great opportunity to revisit Gleebooks, one of Sydney’s independent booksellers and brimming with character and atmosphere. The ground floor is filled with books in from floor-to-ceiling shelves, on tables, revolving displays or just piled up on the floor. Navigating through the narrow walkways can be challenging, and I am always cautious not to knock something over. Unfortunately, I am living on the other side of town and do not come very often to this shop. But when I go there I usually leave with at least one new book for my ‘to-read’ pile. I participated in the competition and won!

Off I went and mingled with about 20 people at Gleebooks’ upstairs event area with an intriguing selection of beautiful coffee table books on art, architecture, design, photography, and music on display. 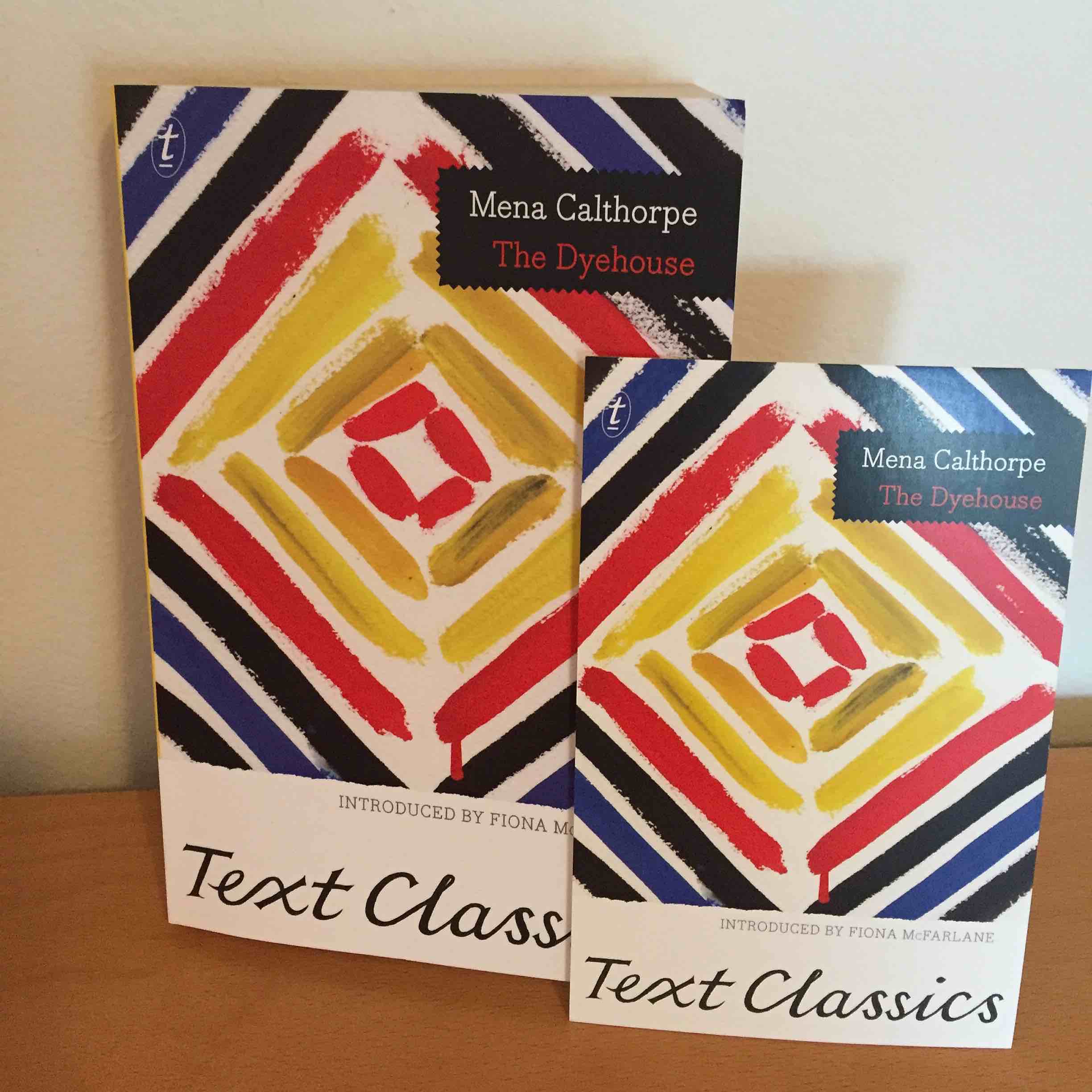 The evening was opened by Michael Heyward, Director of Text Publishing, introducing the 100th book in the Classic Series, The Dyehouse by Mena Calthorpe, with an introduction of Fiona McFarlane.

Fiona had actually discovered a worn edition of The Dyehouse in Gould’s Book Arcade in Newtown (I added this shop to my list ‘to visit’). As she was intrigued by the first paragraph, she bought the copy and after reading it suggested it to Text Publishing for the Classic series.
I loved this story about how this classic found a new publisher, who was happy to invest in forgotten Australian literature and bringing this piece of Australian writing to the Australian readers. David Malouf, who was discussing the book with Michael and Fiona, pointed out how important publishers are to make books available to readers. He remembered times when he was studying in Brisbane and couldn’t get his hands on books to read. Only by pretending he was part of the ‘Students’ Union’ he eventually was allowed to borrow books from a library.

At the end of the presentation, I asked Michael if he had a particular strategy in place to identify potential works for their series. Apart from ransacking second hand stores – at some stage his entire living room was filled with piles of worn books – they are encouraging readers to make suggestions if they come across something interesting. So, if you come across a worn copy of a book you never heard of and the author is Australian, chances are you might have found a potential new classic. Don’t hesitate and email your fabulous find to Text.

In terms of marketing, it is word of mouth from enthusiastic readers that have the biggest impact in promoting the series, Michael explained. He also produced a box of 100 postcards depicting the book covers of each classic. I ended up buying The Dyehouse and the postcards, which make an ideal present for someone, who loves books and great design. At home, I spread the cards on the floor and was smitten by the beautiful covers. I know the saying that you should not judge a book by its cover, but, to be honest, that’s what I do all the time. I discovered many books just because the cover stuck out from the rest and made me grab it. The Text Classic book covers are beautifully designed and eye-catching with the Text Publishing’s brand colour yellow creating coherence and unity for the overall look and feel of the series.

“The Text Classics series is designed to unearth some of the lost marvels of our literature, and to allow readers to rediscover wonderful books they have never forgotten. These books are milestones in the Australian experience. We have chosen them in the conviction that they still have much to say to us, undiminished in their power to delight, challenge and surprise us,” explains the website. To learn more about the background of this unique series, jump over to Text Publishing.

The Dyehouse  is a book about the daily life of the working class in postwar Australia “when work was being radically transformed by new industrial technologies.” The author, who was born in 1905, was member of the Communist Party and later on the Labour Party and ended up working in a textile factory herself. As Fiona points out in her introduction “Calthorpe was expected to protect the interests of the Company at all times; but, like Miss Merton, her sympathies lay with the workers. She began to take notes, thinking, ‘Oh well, while I’m preparing to write my great Australian novel, I’ll write this.’”

I truly enjoyed this book and read it over a long weekend. The author painted a vivid and colourful picture of the daily strains of the factory workers in post-war Australia and the injustices they had to cope with – ending with a fatal incident for one of the most skilled and loyal employees. The Dyehouse becomes a mirror of the society, the power of superiors over the underdogs, the struggle of the factory workers to cope with not only their bosses’ moods but also the looming transformation of their workplace by industrial technology. It also tells the story of the women workers, how they rely on the goodwill of the middle management to further their career and – if they do not resign to their fate – get sacked or harassed. A great read which stimulated my appetite for more Text Classics.

With the special offer to buy five for the price of $50, there is no excuse not to.