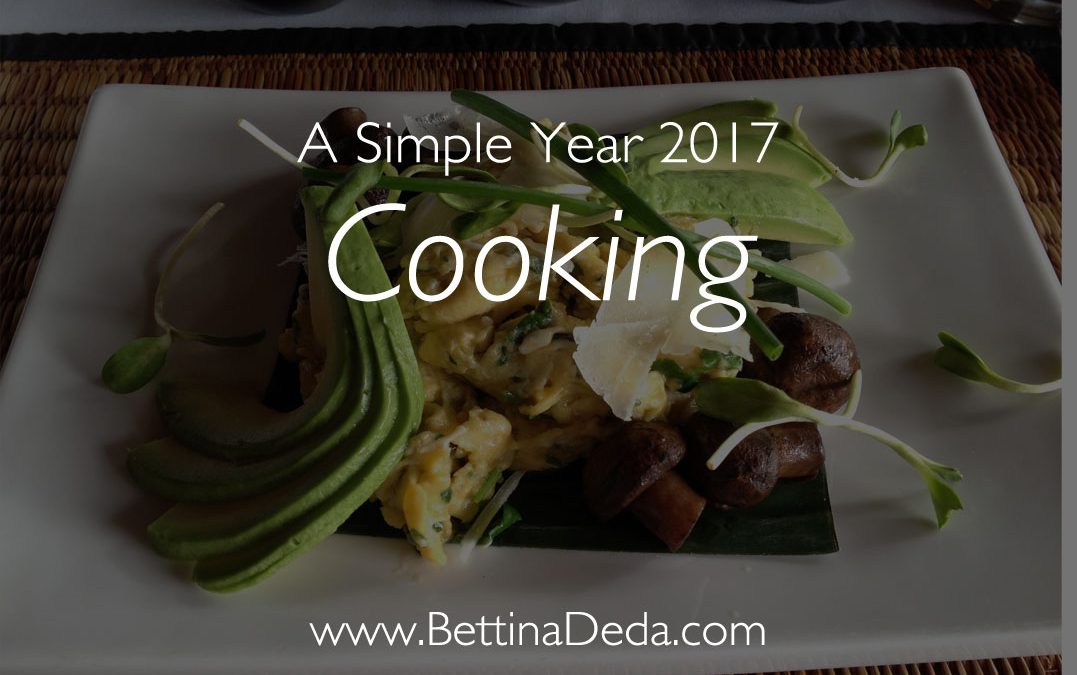 I don’t like cooking, which was the main reason why the April topic of the Simple Year programme did not appeal as much to me as the others. When the monthly email hit my inbox, I opened it reluctantly and logged in to the website. As usual, I found a list of links for further reading plus a short video demonstrating how the presenter had arranged her pantry.

Similar to the previous months, de-cluttering played a major role in the cooking session. One of the tasks was to tidy up your pantry and stock it with those ingredients that would help you create a couple of quick meals if needed, for example, if you have changes in your schedule and can’t stick to your initial cooking plans.

I thought that this was a helpful suggestion and realised that I had implemented it already when I scanned my pantry with her tip in mind. I had done a major pantry makeover back in 2009 after a naturopath had analysed my eating habits and found them to be the reason for my ongoing fatigue during the day. A radical pantry overhaul reduced its contents considerably, and I now only stock ingredients, which I use on a regular basis plus selected baking ingredients I use from time to time.

However, this initial pantry makeover had set me on a path of making pantry de-cluttering a regular habit. Every few months, I go through all my products and throw stuff out that is past the use-by-date or was never used after I bought it. Pantry throw outs usually also happen after my mother-in-law visited, as she repeatedly fills my shelves with stuff that I never use for cooking. Can anyone relate to that?

Additionally, the presenter suggested a list of basic pantry items to go with her recipes, which we could download with an e-cookbook. She also provided a helpful list of 13 methods to prepare your pantry in a way that it can come to rescue in emergencies. Again, when I went through it, I realised that I was doing most of it already.

Once I had read all the material I decided to print out the cookbook, just in case. I knew I would need to make a conscious effort to get started with cooking other recipes than the ones I repeated on a weekly basis based on what the boys liked. Maybe it was time for a change.

This change arrived on my doorstep a couple of days later in perfect synchronicity and universal guidance. A young girl introduced herself as a member of the Hello Fresh family and offered me an introductory discount for two weeks of 20 family meals delivered in a Fresh Box once a week. The meals were quick and easy to prepare and cook, and I wouldn’t get it any cheaper. I reluctantly listened to her explanations feeling something in my gut resisting this new approach of meal organisation and preparation. However, she was adamant and persistent – qualities which I appreciate and own myself – and I promised her to give it go for a couple of weeks starting Easter Monday after our return from the holidays.

As it turned out, we not only have a broader variety of meals on the dinner table, but I also reduced the number of items I keep in the fridge every week. All ingredients are coordinated with the meals, which means that at the end of the week I don't have any leftover ingredients – given that I cooked all the meals as suggested.

I have to admit that it takes a while to adjust my grocery shopping habits, as I only need to buy our standard fridge and pantry items, such as milk, juice, eggs, cheese, fruit, and cereals. Everything else I need to cook dinner is going to be included in the delivery.

After a couple of weeks, I changed to the Veggie box, as we found that we didn't want to eat meat every night. Now, I am playing around with this one and add carnivorous dinners when I feel like or when the boys start to protest.

This service has simplified my life, as, for me, it took the stress out of planning dinner every night.