My Memoir Writing Journey: Never Give up 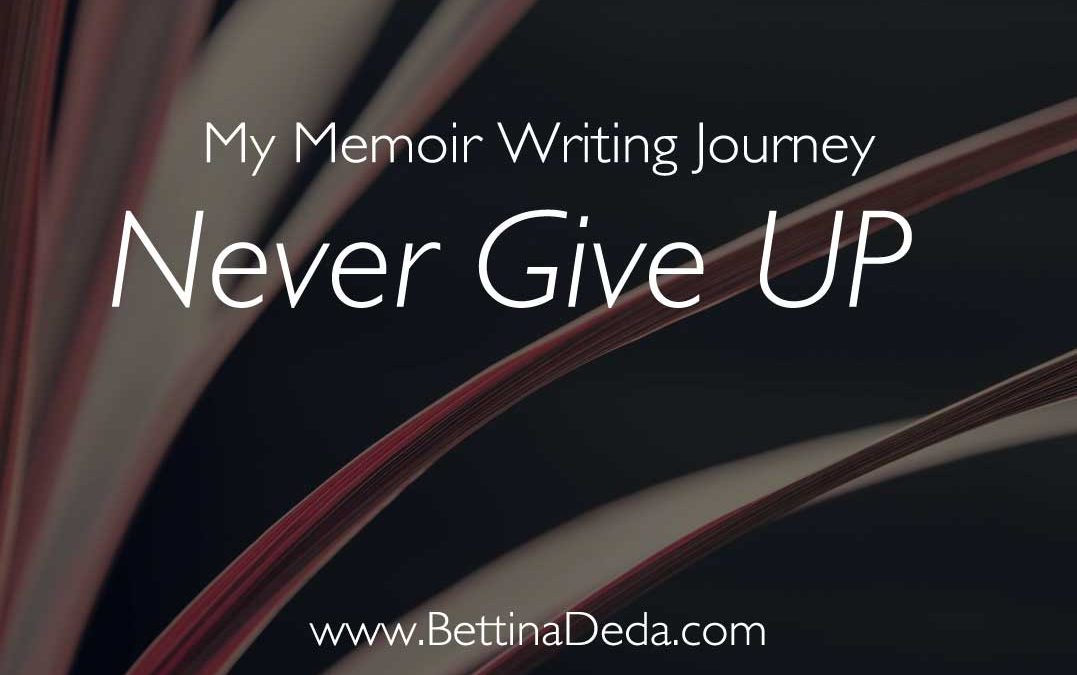 In 2015, I started my memoir writing journey and finished a 75,000-word manuscript by the end of the year. I had it edited and offered it to a selection of publishers in 2016. I shared my experiences in getting feedback on your manuscript, how I built my author platform, embracing the mess, drawing and memory, and The Publisher Pitch.

Pitching and waiting for the publishers to come back to me took a whole year, and at the beginning of last year, I had to face the truth that my story, as I had told it, did not have the potential to be published by a commercial publisher. A hard pill to swallow at first; however, as I believe that nothing happens without reason, I put my manuscript in the drawer for the time being.

Then, something interesting happened. My husband and I spent the last six days of 2016 in my favourite wellness retreat GAIA in the Hinterland of Byron Bay. A series of events, which I initially thought were coincidences, led to a life-changing spiritual experience during a Kahuna massage on the 31 December. After these 90 minutes, I knew something had changed. As I didn’t know what had happened and couldn’t make any sense of it at all, I did what my intuition told me: I started writing it down. I remember myself sitting in the retreat’s library the next morning, my laptop on my knees, frantically typing what I had experienced the day before. My fingers had trouble to keep up with what my mind was dictating. In the following days and weeks, I revised and edited many times what I had written, and suddenly it became clear that this chapter would be the start of a new story. I felt that this could grow into something that many women would be able to relate to. I followed my intuition and started putting words onto paper, a story of change, exploration and discovery, a story where I didn’t know the end yet.

In the following twelve months, I documented what happened to me, captured my experiences, and shared my decision to end my marriage to start a new chapter of my life, precisely ten years after I had left Germany to live in Australia.

What had begun with the urge to capture my spiritual experience during a massage treatment developed into another memoir manuscript. Documenting my journey in 2017 was a cathartic and healing exercise, and I learnt one thing: If I cultivate faith and trust, the Divine Order will orchestrate everything I need to know in the perfect time-space sequence. And so it happened.

Halfway through the year, I had the idea to curate a collection of true stories of women going through menopause and seeing this transition as an exciting new phase in their life rather than the beginning of the end. I put together a book proposal including my story and offered it to one publisher. When I found an email in my inbox asking me to contact them, needless to say, that I was more than excited. The constructive feedback I received to my story was motivating, and I knew that this story, my second memoir manuscript, had the potential to find a publisher’s interest.

In December 2017, I had written almost 100,000 words and decided that I would do a structural edit of my material in the first week of January where I was alone at home. In a four-day editing marathon, I focused on reading, reviewing, reorganising, and rewriting my story.

When I received the newsletter from the NSW Writers’ Centre a few days later, I read about the opportunity to have a non-fiction manuscript assessed in February. Without further ado, I booked my spot.

My story is not yet finished but I know by now where I will end it. So I keep writing and trusting in the Divine Order.